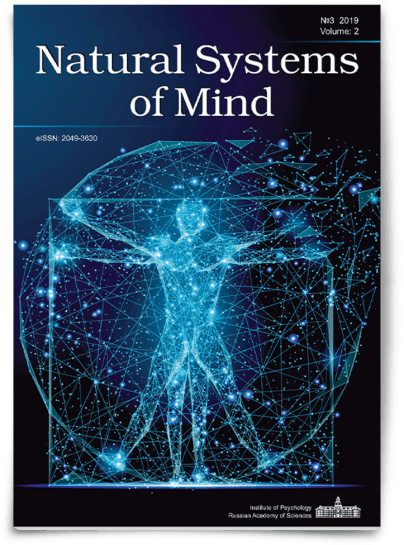 The main flaw of modern science is its excessive differentiation and weakness of interdisciplinary generalization. A facet approach does not allow us to catch the holistic nature of human being and to realize a theoretical breakthrough in the study of reasonable human behavior. Nowadays, the solving of basic scientific problems, AI systems design, medical care, and other in the framework of only one scientific discipline becomes especially impossible. The time to scatter stones has passed; the time has come to collect them. The mission of the journal is to promote effective international multidisciplinary interaction of specialists in the study of reasonable human behavior based on a systemic approach. We proclaim the principle of open access to publications, which makes interdisciplinary research available online to everyone, all over the world. Journal welcomes both previously unpublished materials at the intersection of various scientific disciplines devoted to the study of the systemic foundations of reasonable human behavior, as well as the replication of scientific data to confirm the reliability of the facts and early-obtained regularities. We are committed to developing the generation of scientists of the future who will be able to overcome interdisciplinary barriers.

Read volume
Highlight
Citations
We use cookies on our website to give you the most relevant experience by remembering your preferences and repeat visits. By clicking “Accept”, you consent to the use of ALL the cookies.
Cookie settingsACCEPT
Manage consent

This website uses cookies to improve your experience while you navigate through the website. Out of these, the cookies that are categorized as necessary are stored on your browser as they are essential for the working of basic functionalities of the website. We also use third-party cookies that help us analyze and understand how you use this website. These cookies will be stored in your browser only with your consent. You also have the option to opt-out of these cookies. But opting out of some of these cookies may affect your browsing experience.
Necessary Always Enabled

Any cookies that may not be particularly necessary for the website to function and is used specifically to collect user personal data via analytics, ads, other embedded contents are termed as non-necessary cookies. It is mandatory to procure user consent prior to running these cookies on your website.